You’re Going to Be a Dad! – A Modern Look at Pregnancy, Parenting, and First-Time Fatherhood 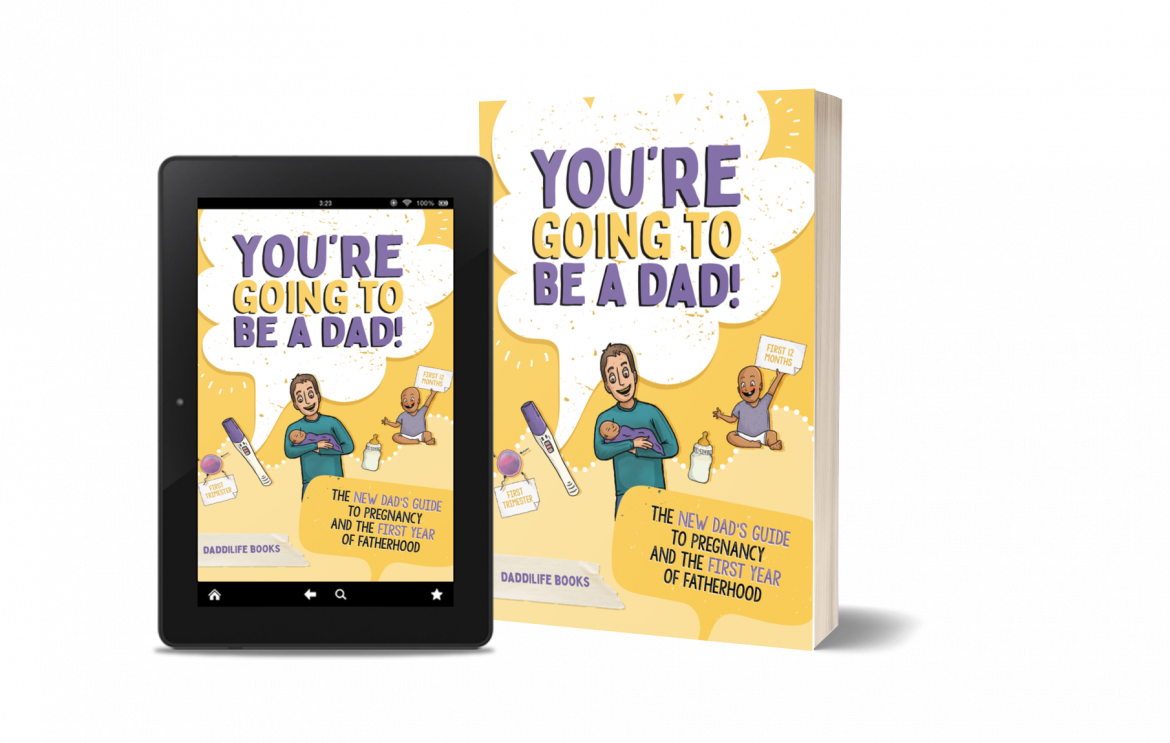 We’re experiencing a generational shift in what it means to be a ‘dad.’ If you are a father, plan to be a father, or an expected father-to-be, then you’re probably looking for helpful resources that don’t just outline the basics, but also understand the concerns, anxieties, and priorities of modern-day dads.

And that's why You're Going To Be A Dad was written - a book about pregnancy and the first year for modern day dads!

The role of modern day dads 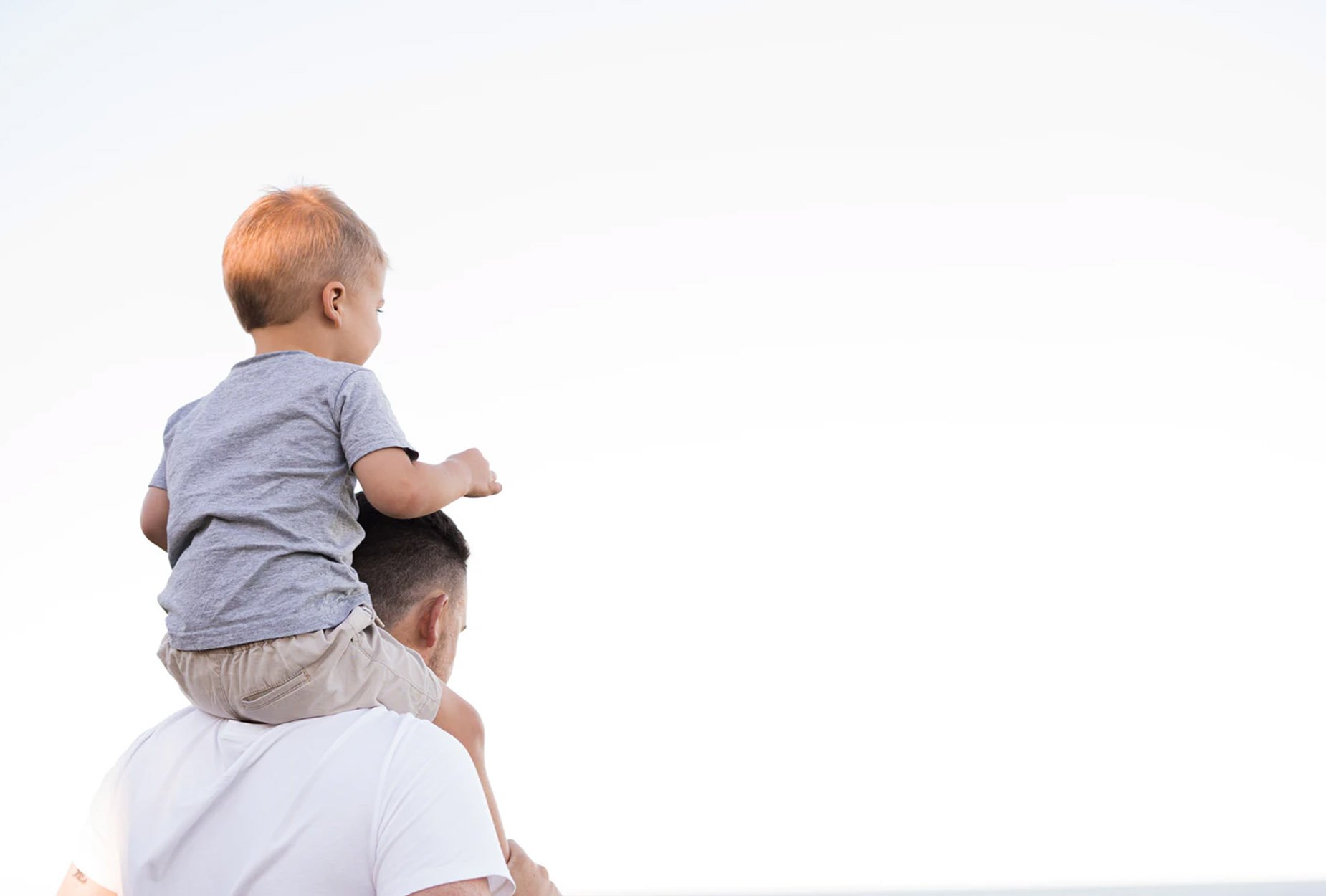 While the journey of pregnancy from conception to birth hasn’t changed over the centuries, the role of dads in the lives of their children has changed dramatically. In the past, fathers have often been perceived as breadwinners of the family – going off to work, “bringing home the bacon,” and providing income for the family while their partner takes care of domestic tasks.

Although our culture still struggles with this more traditional view on the family unit, the last few years have seen a radical shift in the mentality of dads and dads-to-be. Us modern dads want to be involved in the pregnancy, birth, and raising of our children. We value cooperation and co-parenting, seeking ways to support our partners and equally share the struggles and successes of raising our children.

Why We Need a Modern Guide to Fatherhood

Modern dads require modern learning material, and while the quick how-to and self-help videos on Youtube can help us in a pinch – nothing is more helpful for retaining the overarching ideas and trials of fatherhood than a book. However, when we sat down to collect and read some of the most popular books available for first-time fathers, it became pretty clear that there was a problem. Many of the existing books and resources on fatherhood and parenting are old, problematic, or downright unhelpful.

Other first-time fatherhood books we found seemed to reiterate certain mentalities about the dad’s role in pregnancy and post-partum like “it’s time to put the beers away and get serious” – or they talked about the importance of being a strong and stoic male figure, unaffected by this massive change in your life. If not strong and stoic, they made reference to the dad in the corner of the delivery room making ill-timed jokes at their partner’s expense. Altogether, it may be an oversimplification of the information that was presented, but the tone we found felt very distant from our own feelings on fatherhood.

From those books, what we uncovered is that this role was self-fulfilling – with the only information out there for dads reinforcing a negative role model, a distant or less involved father – that role was more easily created and reinforced for fatherhood. But across conversations with our community of fathers, across numerous interviews over the last five years – that isn’t reality, and it isn’t what us dads want.

That’s why we at Daddilife made a decision. If there wasn’t a book out there to properly support the dads of today, then we were going to have to write our own.

The Overlooked Psychology of Fatherhood 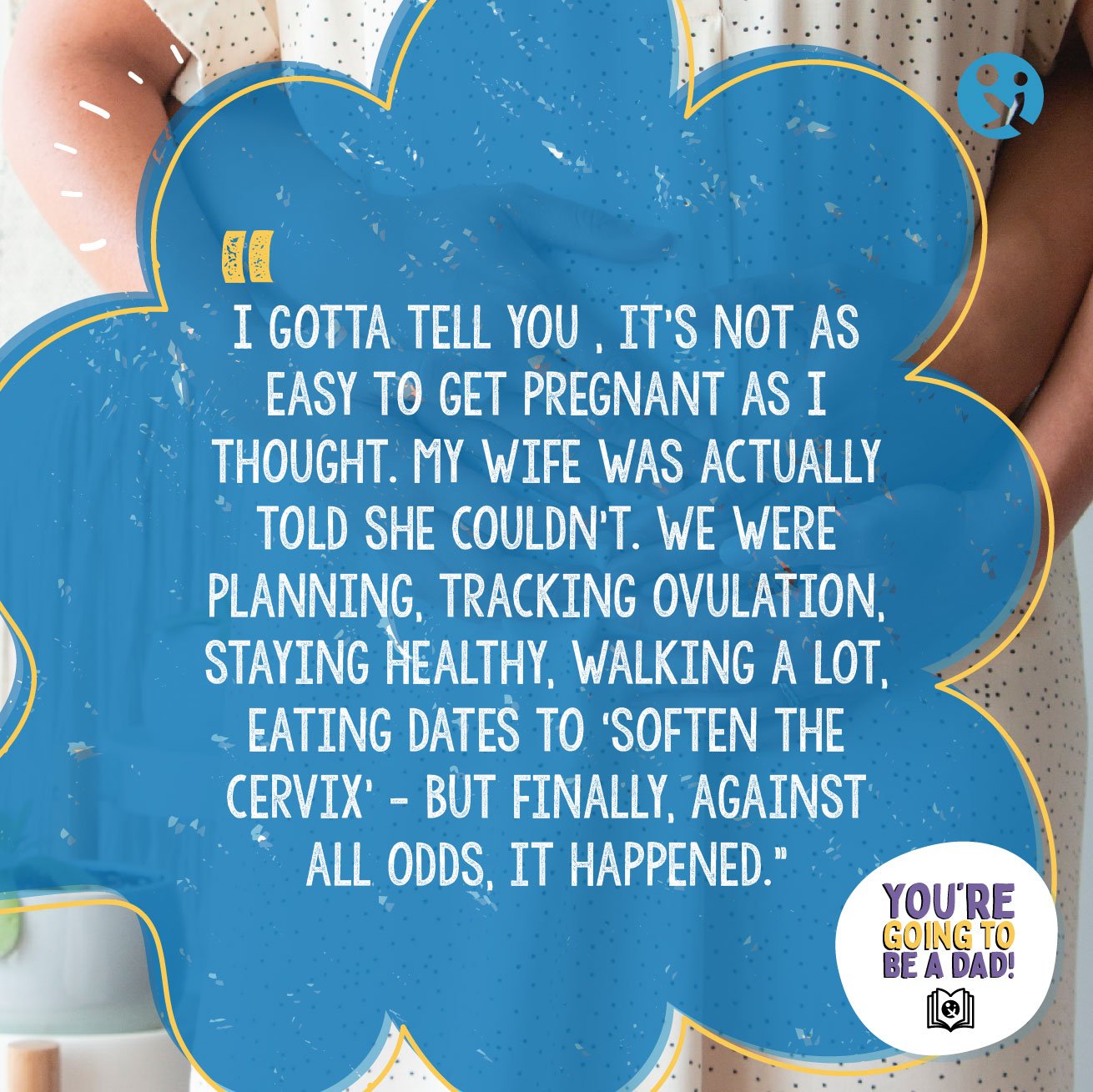 Modern dads show emotion, they communicate with their partner, and they know that the joys of life don’t end when they welcome in a new life into their familial unit – if anything, the joys are enhanced.

They’re also more involved in the pregnancy than ever before. Dads want to understand what their partner is going through, both mentally and physically, so they can be as supportive as possible. That is why our book goes into the details of pregnancy, covering the science of baby’s development in every week of each trimester, offering some practical advice on what your partner might be experiencing. The science of gestation can be complex, but we made sure it’s all there and accounted for in plain English.

We also took care to acknowledge what might surprise a lot of dads about pregnancy – the clear and present psychological impact that it may have on them. While their partner’s changes might be the most obvious, dads can undergo a lot of physical and psychological changes during the course of a pregnancy too – even down to a hormonal level and adjustments to their brain’s gray matter. There’s also as surprising number of new studies on how this change in fathers is reciprocal with their children - what’s become known as “The Father Effect.”

A Step-by-Step Guide Through the Pregnancy Journey 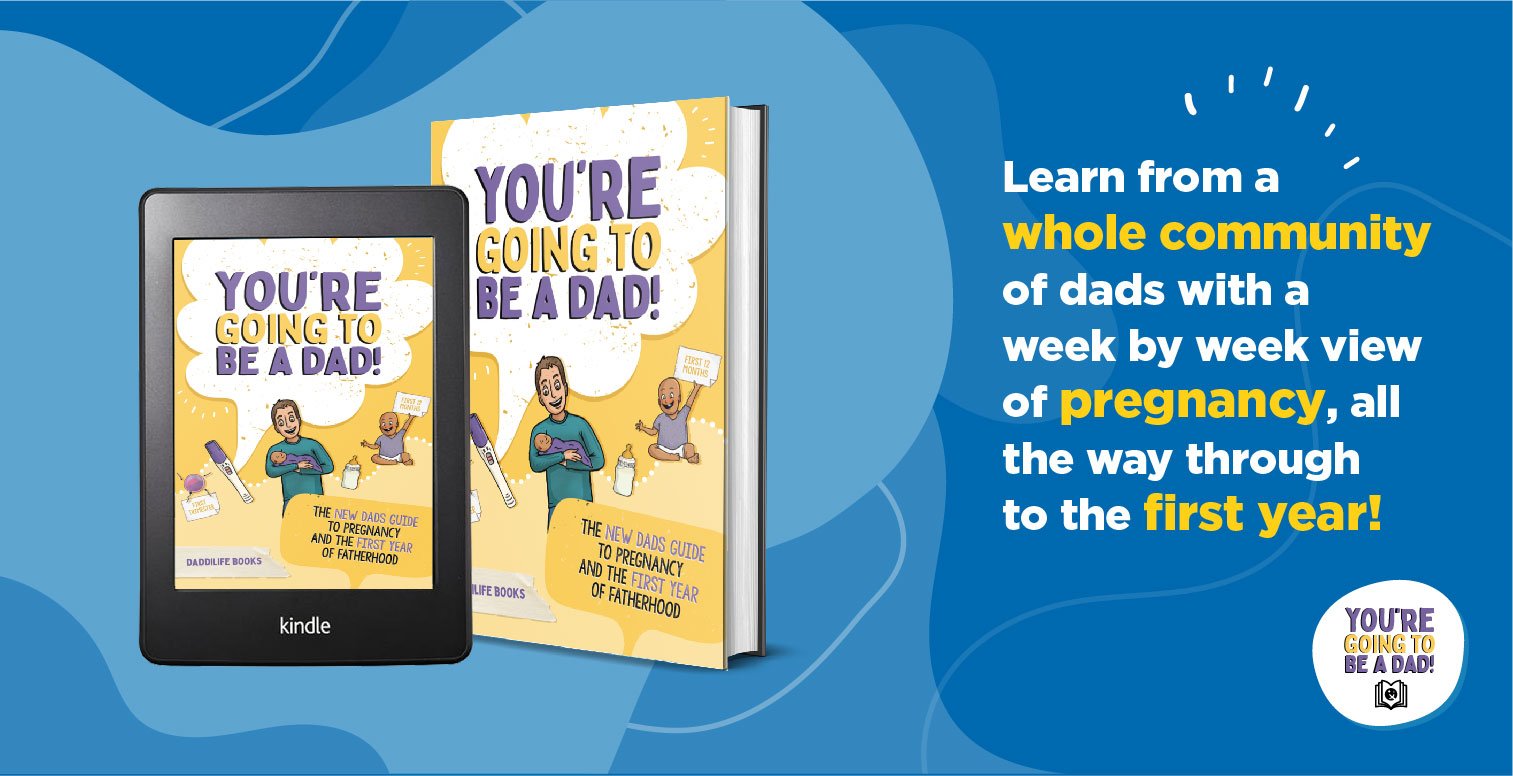 From frantically racing to the grocery store to buy a pregnancy test, to setting up a nursery, to being there in the room when the baby is born, our book takes a candid look at the many situations that first-time dads are likely to find themselves. By honestly discussing the emotional impact that pregnancy can have on them, our book helps dads to process their own feelings in a healthy way, while supporting the needs of their partner at the same time.

Of course, the learning curve of being a dad doesn’t stop after the birth. The first year of being a parent can involve some of the biggest lessons and adaptations. That’s why we go beyond the pregnancy too, diving into the first year and providing the information dad’s need as they learn on-the-go.

We also provide a wide array of tips and tricks throughout the book, specifically placed in memorable locations so that they are easy to flip back to and consult. Advice on packing go-bags, healthy communication, and common (though unexpected) issues are all there. There is even a selection of helpful vocabulary terms and definitions in each section, helping dads to understand and effectively communicate vital information related to the pregnancy.

Real Advice from a Community of Dads 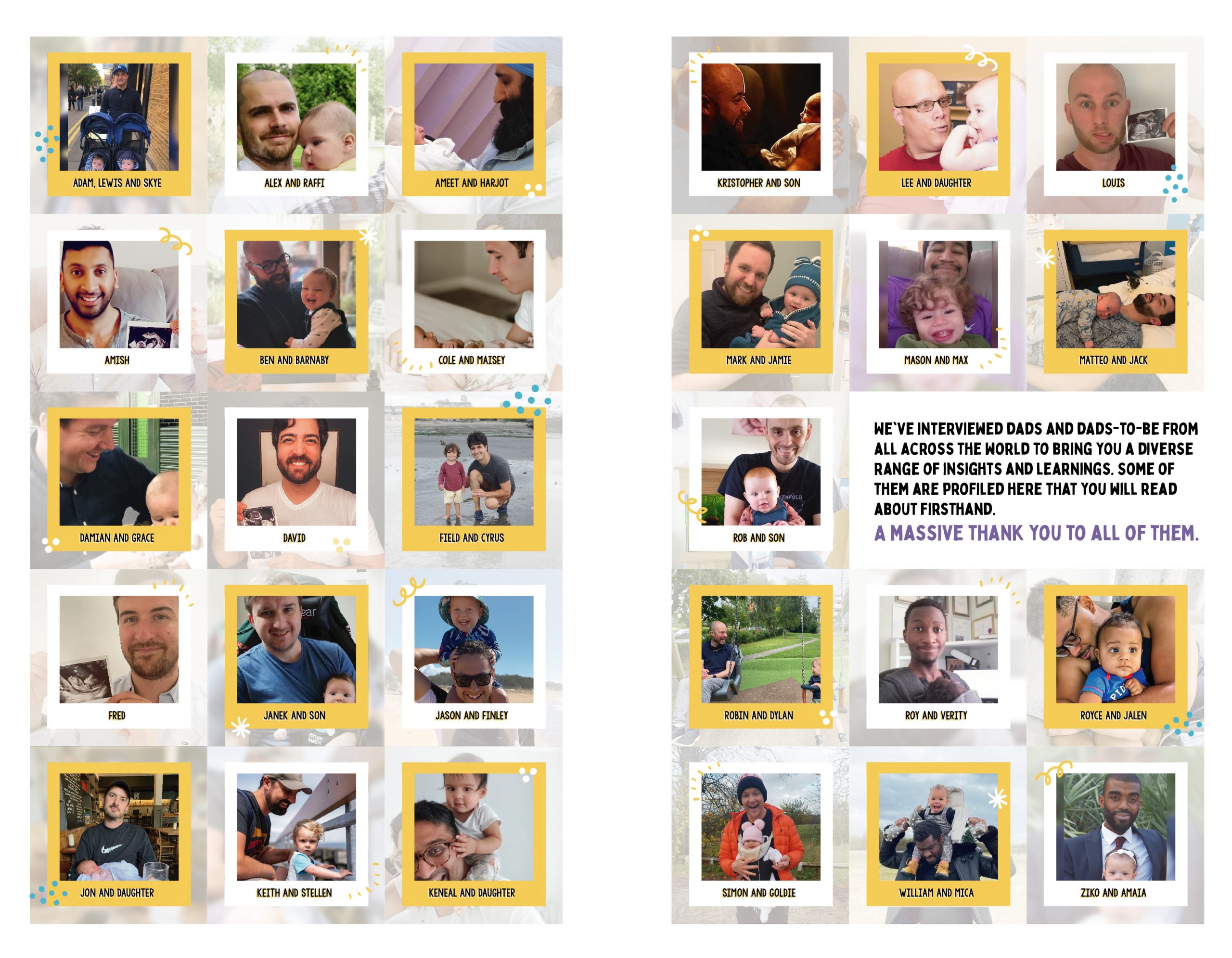 While we are exceptionally proud of the information we have accumulated through research for the book, what really sets it apart are the interviews we conducted to make it all possible. Over the past five years, we dedicated ourselves to having real, honest conversations with dads and dads-to-be from all around the world.

We covered a wide range of topics with different fathers from pregnancy, labor, birth, and postpartum. And we made sure to ask the questions dads aren’t often asked – how they felt personally, their doubts, fears, anxieties, the things they kept only to themselves, the ways they adapted to their new role as dad while still questioning what the title truly means to them.

We are incredibly proud of the dads we interviewed and so immensely thankful for their help before and throughout the writing process. This book couldn’t have been completed without them, and its meaning would be lost without their input.

By providing honest answers from honest fathers, we hope that their words can remind our readers that while their pregnancy experience is unique, they are never alone in that experience. Every insight we provide comes from science, our own experiences, and the experiences of those in our community.

Here are just a few examples of what our dads had to say:

“I actually talked with my father early on, after finding out about pregnancy. To end the suspense, our first child was an accident, and I was unsure about being a father, even a bit shaken up at the time. But my own father helped me. He said, If I could have my time back, the only change I’d make would be to have kids even sooner. You’ll feel the same someday. It was massively comforting to hear. And he was right.” - Alex H.

“We built a good support system, that was key. We’re both in the medical field, and you’d think that might give us an advantage. But without support, support we intentionally built up, it might’ve felt impossible. So, we had friends, family, helping us when we just didn’t feel we had time to even cook with ourselves. The smallest things, they did laundry for us. But those small things, they’re just like grains of sand to a beach, the little things add up a lot and pay huge dividends.” - Mason C.

“Somehow it seems like I never thought I’d feel ready to have a kid. There was always something, financials, or the right time in life. The thing they don’t tell you is all that stuff, you’ll figure out. It seems like a lot, but broken down over time and over days and years, you’ll figure it out.” - Jan T.

Your Introduction to a Dedicated Community of Dads

The best part about the book is that it doesn't end there. You’re Going to be a Dad! is an excellent resource for guiding you through pregnancy, birth, and postpartum, but it's also an invitation to join a community of dads who are in this journey of fatherhood alongside you.

The same dads whose interviews, experience, hard work and dedication made this book possible, are also a part of the Daddilife community. They use the platform to share advice through blogs, helpful articles, all-too-clever memes, and community conversations.

On our site, we offer a plethora of information about anything and everything that has to do with being a dad and caring for a child. From dad jokes and recipes, to maintaining your own health as a father, we are a community of dads working to assist and uplift each other, while we learn how to be the best dads that we can possibly be.

You can get a copy of You’re Going to Be a Dad! on Amazon.

You’re Going to Be a Dad! – A Modern Look at Pregnancy, Parenting, and First-Time Fatherhood was last modified: January 21st, 2022 by DaddiLife 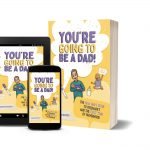 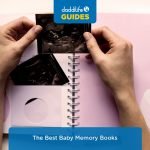