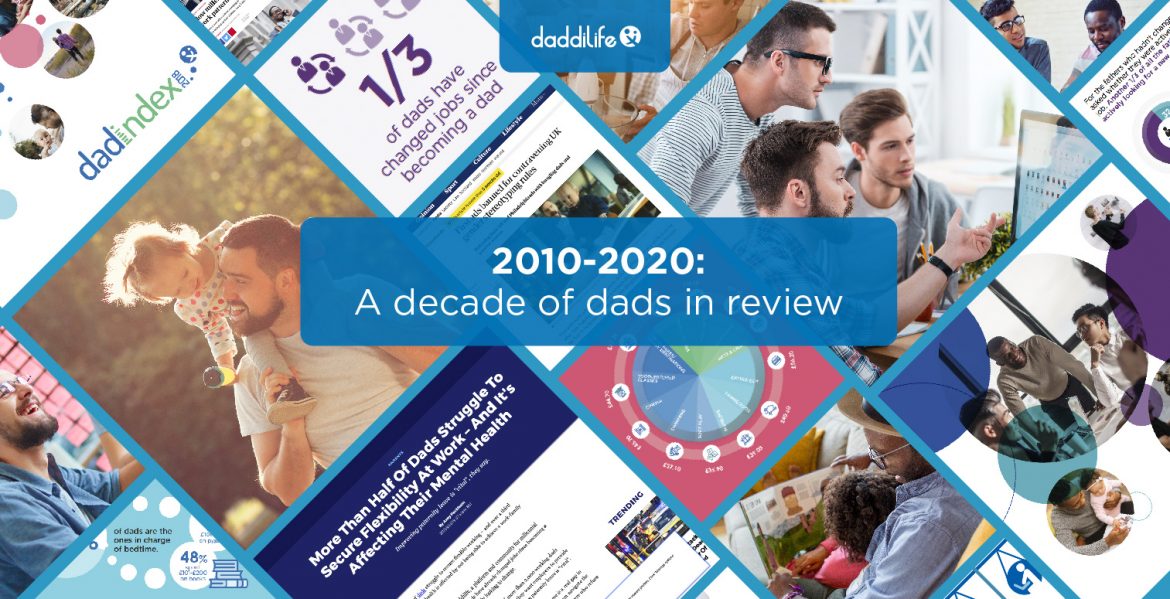 We took giant strides forward in the 'decade of dads.' And the battle lines for the next ten years have already been drawn.

As we head into the 2020s this kind of analysis is happening in all sorts of areas, from politics and economics to the environment. It should also happen with fatherhood. A lot has happened in the last ten years that concerns dads. Where all that activity leaves us at the start of the third decade of the 21st century is worth pausing to consider.

With that in mind, welcome to our review of the decade just gone.

2010 - 2020: Table of contents
1. A decade of progress for dads?
2. A partnership of equals
3. Parental leave and beyond
4. Shared parental leave - a great leap forward?
5. A decade of disappointments?
6. Employers good and bad
7. The next decade ahead

1. A decade of progress for dads?

Was the last decade a positive one for dads? Undoubtedly. John Adams is a dad of two daughters, aged 10 and 7, and the author of Dad Blog UK. His fatherhood journey started at the dawn of the decade and his blogging soon after that. John thinks the 2010s were a decade of real progress.

“Unquestionably, things have improved. You used to hear people say 'is he a hands-on dad?' when these days they're more likely to say 'how hands-on is he?'. Fathers are more high profile and it's very rare to see family advertising campaigns take place without male representation. Going back just eight or nine years, men were absent from the marketing materials of family-focused products.”

The subject of media representations of fatherhood is one we’ve tackled here on DaddiLife. In 2017, the Advertising Standards Authority (ASA) said it would start banning advertisements that reinforced harmful gender stereotypes, including all-too-common representations of dads as comedy buffoons.

It wasn’t before time, and it hasn’t stopped ridiculous stereotyping altogether. A year later we reported on a daughter’s demand that Kellogg’s represent dads as well as mums on packets of her favourite cereal. It was perhaps a sign of progress that the company did so immediately, and turned the whole saga into a PR opportunity.

2. A partnership of equals

Dads are taken more seriously in the media because, more than ever, parenting is considered a partnership of something approaching equals.

Blogger and tech entrepreneur Jo Wimble-Groves - author of the Guilty Mother blog - has firsthand experience of the way a father’s role has evolved in the last few years.

“Parenting feels more of a ‘team effort’ to raise kind, well-rounded, confident children who benefit from the differences and strengths that both parents give,” she says. “My husband is a really hands on father and is present for our children in every way he can.

“Working in London full time with no flexibility to work from home due to the nature of his job, he can’t always make plays and concerts. However, he works hard to make up for it by spending valued one-to-one time with them, helping with homework as well as listening to their thoughts and feelings in quiet spaces.”

There’s plenty of evidence that even dads with demanding full-time jobs are doing all they can to make sure they spend plenty of quality time with their kids. We have profiled several who combine work and family life in a way that works for everybody.

3. Parental leave and beyond

The dads who have got it right tend to have supportive employers and colleagues, and there are certainly more of them about in 2020 than there were in 2010.

“There is a groundswell of change occurring in this area where flexible working for both parents is rapidly becoming the norm and many companies - Diageo, Heineken, Standard Life Aberdeen and others - are offering six and nine month fully paid paternal leave packages along with comprehensive flexible working policies,” says Dave Devenney, director of Fathers Network Scotland.

Dave believes that in progressive companies a “spectrum” of family friendly possibilities are now as important as wages in the recruitment and retention of top talent, and that they are increasingly directed at both parents.

We’ve found that too. Our Dads at Work hub profiled companies that are championing better ways of working for both parents. Professional services giant Deloitte is one. The company is one of a number to realise that keeping both parents happy is good for mums and dads and the bottom line. Parents with the time to be parents make more productive employees.

One major advance in the last decade was the adoption, finally, of Shared Parental Leave in 2015. The scheme, pioneered by ex Liberal Democrat leader Jo Swinson, allows parents to share up to 50 weeks of maternity leave and 37 weeks of statutory pay after their baby arrives.

How big an advance is SPL? Put it this way. Prior to 2015, dads had the right to one or two weeks of paternity leave, and that’s it.

“My proudest moment from my time in the Coalition Government was introducing Shared Parental Leave,” Jo told DaddiLife. “It was the most important thing I wanted to deliver because it’s good for families, it’s good for children and it’s also good for equality in the workplace. For me it feels like a win-win-win policy.” 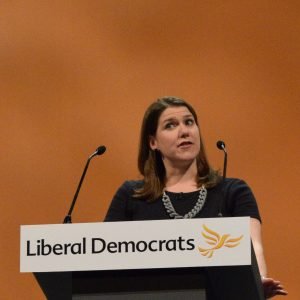 5. A decade of disappointments?

But the 2010s was not a decade without disappointments for the cause of equal parenting. And in fact, SPL is a case in point.

SPL was an extremely good and necessary idea, half-heartedly implemented. As we reported, only around 2% of eligible couples are making use of the scheme.

Is that because dads are shirking their responsibilities? Are the first few weeks and months with a new baby just too much like hard work for feckless men?

No. Predictably, it’s all about money. Research found that finances are still a major stumbling block to the large scale take up of SPL. It revealed that:

“What has disappointed me is that for dads who are not working for more enlightened companies, paternity leave remains niggardly and continues to reinforce the old gender stereotypes of men out working and women being the primary carers,” says Dave Devenney.

“Unless and until paternity leave is fully paid and equally shared, comprehensive take up by dads simply won’t take place. They and they’re families cannot afford the financial penalty.”

In fact, in the last decade fathers working for enlightened employers have been rewarded in all sorts of ways, with benefits that continue long after the early weeks and months of fatherhood. Agile working is one way dads can spend more time with their families, something that was almost unheard of - at least for men - a decade or so ago.

Deloitte and companies like it represent best practice - but too many firms still refuse to adopt their enlightened approach. Our own major Dads at Work research confirms this. It found that a large majority (87%) of modern dads are involved in day-to-day parenting, and that dads are asking for flexible working arrangements in record numbers.

But too many of these requests are being knocked back. Our study revealed that:

Working life for dads is still fraught with pitfalls, leading to an epidemic of guilty dads who feel they aren’t spending enough time on either their careers or their family life, and are constantly torn between the two.

And that is not just affecting fathers, but families more generally. Mums who want to work are still sometimes held back by traditional expectations. Steph Douglas, mum blogger and founder of thoughtful gift company Don’t Buy Her Flowers, says: “I think we've a long way to go, especially in certain industries. More traditional sectors are still dominated by men in senior positions, and there's an expectation that 'the wife' will be the one to drop everything if a child is sick or during school holidays."

“I think it's years and years of conditioning so it's going to take time. And for more men to be ok with standing up and saying (loudly) 'I have to leave now to do the school pick up' - as women have done for years.”

7. The next decade ahead

Still, great strides have been made. There are more stay-at-home dads than ever, and more dads who work part time. Our research showed that dads are so determined to play a full part in the parenting journey that huge numbers are changing jobs and sacrificing pay rises to do so.

“Women want to work, men want to be involved at home, it's just working out how to do that when a lot of the system and expectation seems to still suit a more traditional (out-dated!) set up of man working, woman at home,” says Steph.

The desire for change has been well and truly set in stone in the 2010s, and that’s real progress. The 2020s needs to be a decade when that desire is made a reality for many more families. When that happens, expectations will change and a host of benefits will follow.

As John Adams says: “Mums tend to have a group of friends on speed dial they can call upon in an emergency but dads don't have the same levels of support. As men become more involved as fathers and as more men do what I do and run the family home, that level of support for guys is going to become more and more important.” 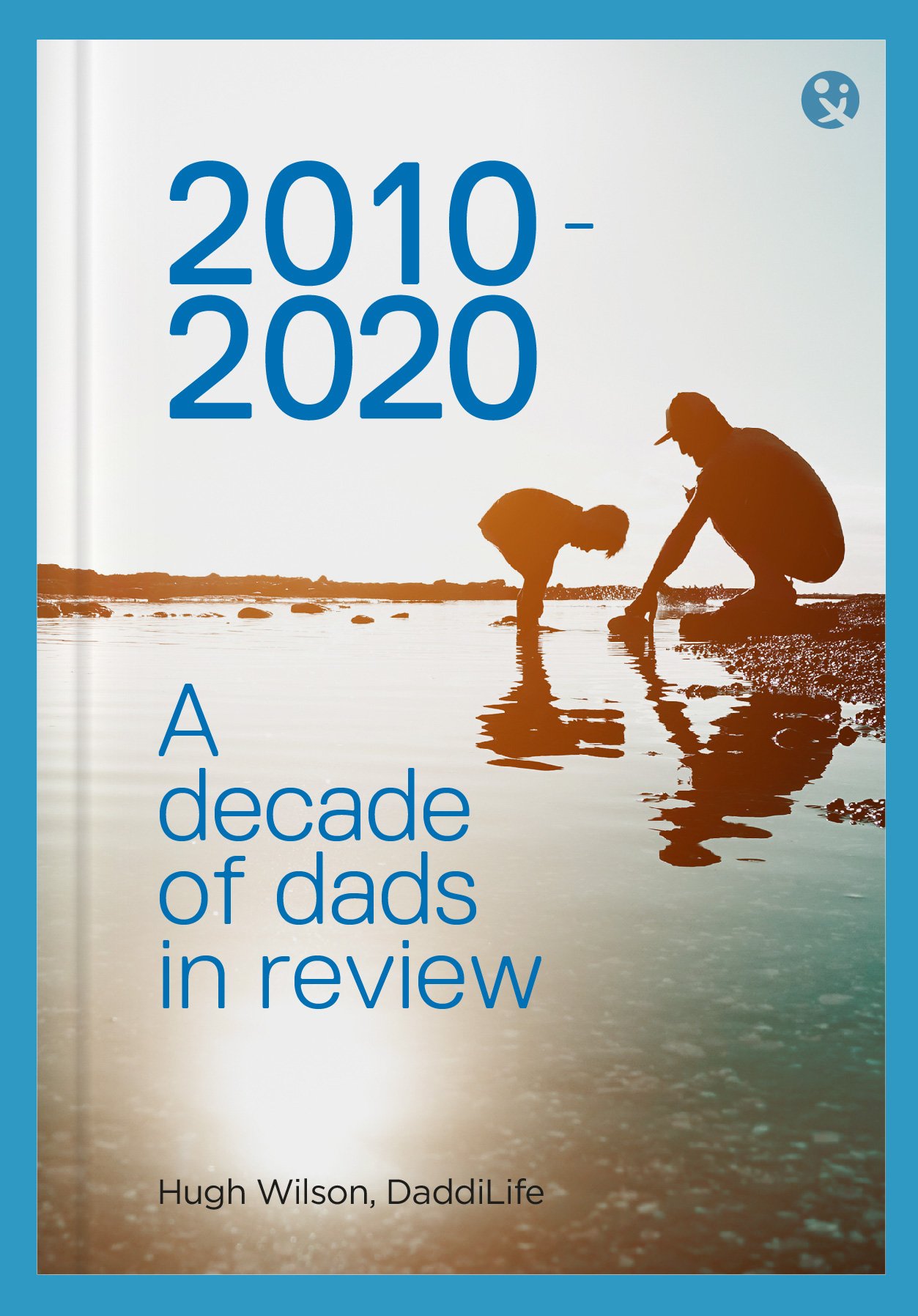 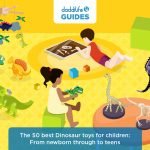 The 50 Best Dinosaur Toys for Kids of Every Age | DaddiLife 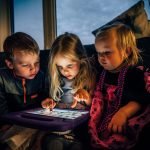