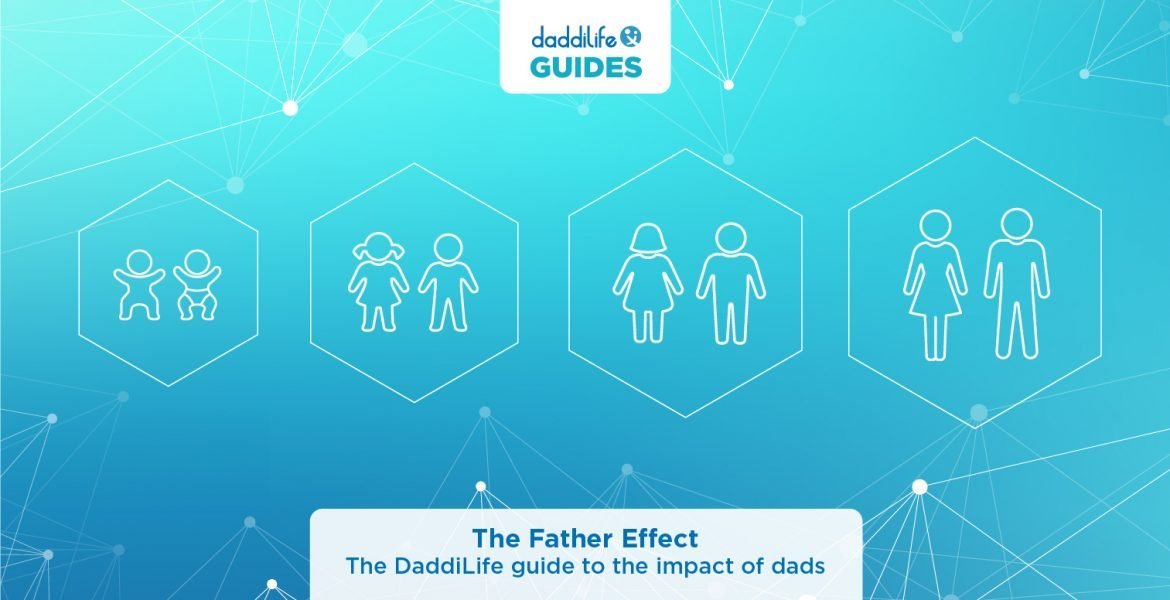 We know that active and engaged fathers have a fundamentally positive influence on the lives of their children. But for a long time, science was rather more interested in mums, because mums were seen as the main carers of children. And when science did turn its spotlight on dads, it seemed more important to investigate the negative effects of absent or abusive fathers rather than the positive effects of dads who were present, committed and involved.

But recently that has changed and science has shown an increasing interest in the positive influence of dads. What is now emerging is a new and fundamental understanding of the “father effect”, and the very real impact that dads make at every stage of the lives of their children; from pre-birth right through to teenage years and beyond. This guide is collated from a number of sources, all backed by the latest scientific research.

The role allocated to dads during pregnancy has often only been one of support to mums. That’s still an important role, and indeed a role that can have important outcomes for the health of the baby. But recent research has shown that dads have a direct effect on the health of babies even in utero.

When men support their partners during pregnancy, good things happen. Researchers from the University of Florida found that fewer children died in the first year of life (from any cause) when dads were involved with their partners during pregnancy. By contrast, children with absent fathers were more likely to be born prematurely and with lower birth weights. Maternal complications were also more likely when dads weren’t around. 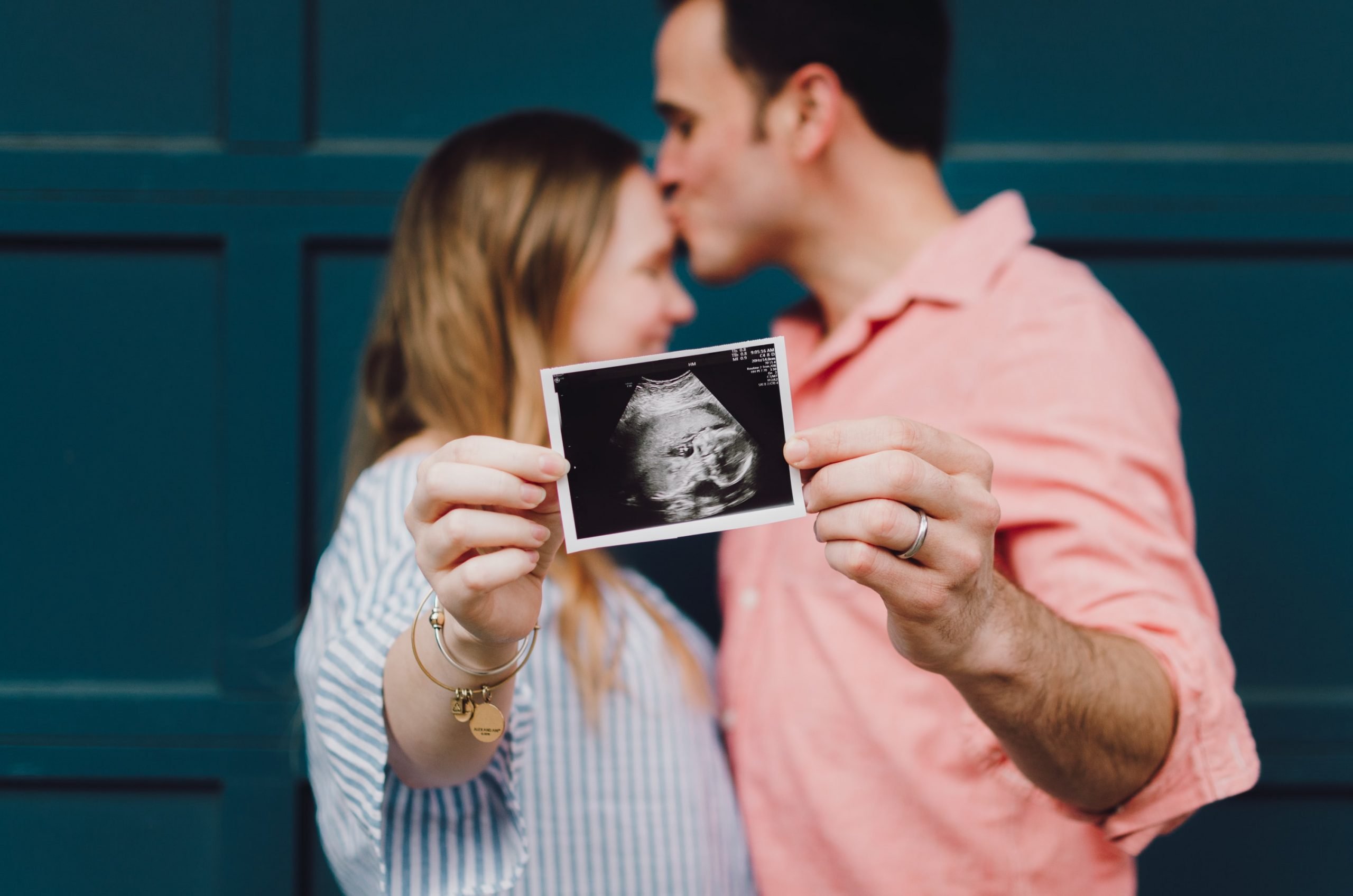 A 2019 study from researchers at the University of Cambridge found that dads who are stressed during their partner’s pregnancy are more likely to have children with emotional and behavioural problems as toddlers. It’s not known for sure how paternal stress transmits to unborn children, because the findings appeared to hold true even when mothers were not themselves unduly stressed and anxious.

A dad’s influence goes right back to the very beginnings of life. It’s now thought that a father’s influence on the health of his child starts at conception. A growing body of evidence is showing that the age, health and lifestyle of dads at conception (and in the months before) can affect the wellbeing of their children after birth. For example, obese men are more likely to father children who themselves go on to be obese. Their children may also have a greater chance of being diagnosed with diabetes.

The early hours, days and weeks

The period directly following pregnancy is an important time for parent-baby bonding. Science already knew that about mothers. It is now increasingly showing that dads who interact with their babies from the moment they are born develop bonds that can have a hugely positive impact on child development. 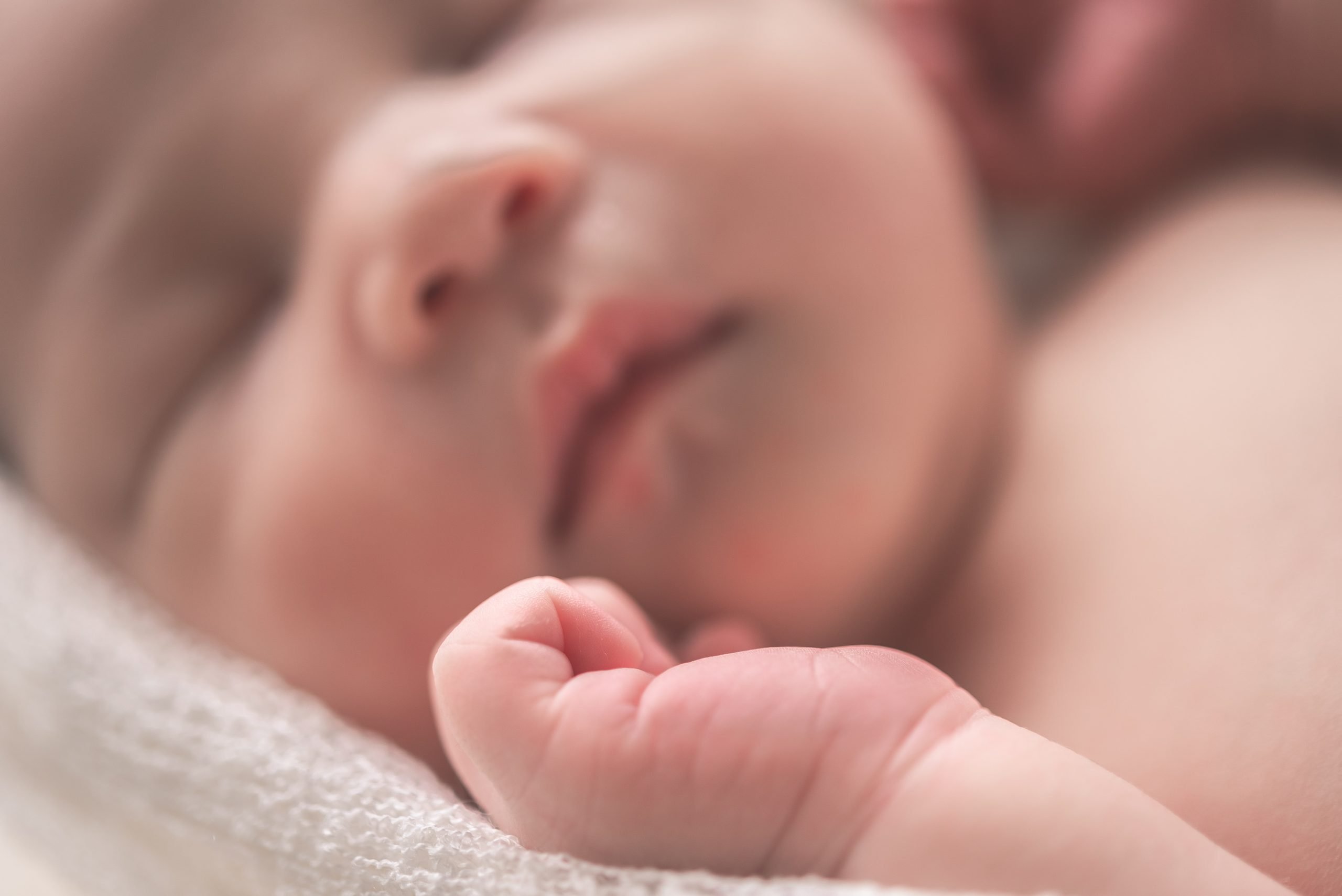 Lots of research shows the importance of skin to skin contact between mums and babies, so much so that placing a baby on its mother’s chest straight after birth is now considered standard practice.

Studies now show that skin to skin contact is important for dads too. Most importantly, it encourages the loving bond between dads and babies. In preterm babies it has even more dramatic effects, including “pain alleviation, paternal-infant attachment, and family bonding. It also creates a more harmonious caregiving environment, which can be beneficial to infants’ development.”

Dads should be encouraged to interact right from the start - and to keep interacting. A recent study from the University of Notre Dame in the US noted raised cortisol levels in fathers who held their newborns on the day of birth. While cortisol is known as the stress hormone, controlled doses are thought to prepare men for committed childcare. The study went on to find that those with raised cortisol were likely to be more involved with play and infant care in the early months of a newborn’s life.

"Studies like this give us an understanding of the value of having the dad present at birth and engaging with the baby," said Professor of Anthropology Lee Gettler, who conducted the study. "What we see in the special days around birth is that dads' hormones - how much dads are producing overall and how their hormones quickly change when they hold their newborns - are linked to what fathers are doing months later. This relates to how men establish bonds with their newborns as well as with their partners and how they will co-parent.”

The first weeks and months

Early contact and interaction is essential for establishing bonds that will tie dads to their children for life. As weeks pass the direct impact active and engaged dads have on child development becomes even more obvious.

That’s best demonstrated by a study carried out by scientists from Imperial College London, King’s College London and Oxford University. They looked at how dads interact with their babies at three months of age and measured the infants’ cognitive development more than 18 months later.

The results were stunning. The babies of dads who played with them in an engaged, active way did better on cognitive tests at the age of two.

Professor Paul Ramchandani, who led the research, said: “Even as early as three months, these father-child interactions can positively predict cognitive development almost two years later, so there's something probably quite meaningful for later development, and that really hasn't been shown much before.”

In other words, when dads interact with them in babyhood, kids learn faster. In fact, a review of all studies in this area found that the connection “is positive and statistically significant.”

Newborns grow into babies, and babies into toddlers. In each phase of life, the influence of dads is shown to be a fundamental factor in positive development. Let’s explore various scenarios and, in each, the difference active fathers make. 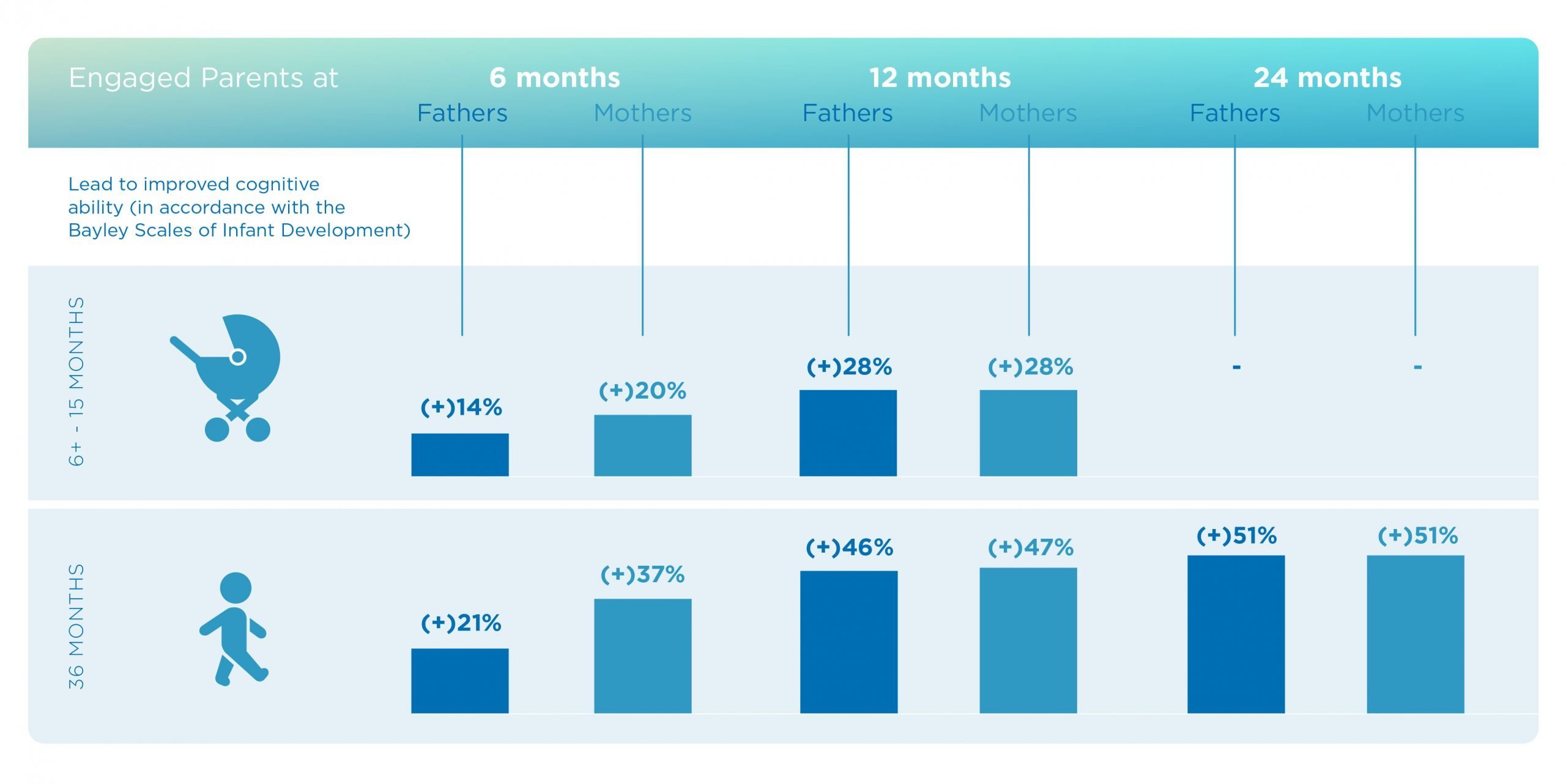 A 2016 study featured in The Journal of Applied Developmental Psychology examined the link between parental sensitivity/ engagement and improved cognitive development in children up to 3 years old, and found staggering impact from active fathers even from the age of 6 months. The chart above shows the direct correlation found from active fathers and the improvements in cognition up to the age of 3. 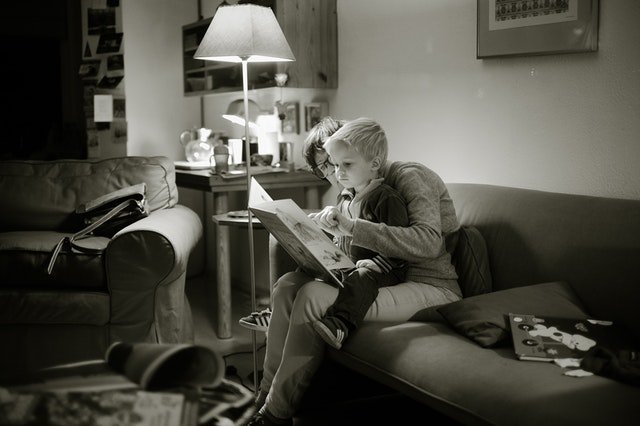 Dads should be involved with bedtime as much as they can, simply because it is another opportunity to bond with children and positively influence development.

That’s particularly true when it comes to reading to young children. We’ve previously reported, about dads reading to children being a hugely positive activity. In fact, a Harvard University study from 2015 found that children benefit more from dads reading bedtime stories than mums (though they benefited from both), because reading with dad was found to spark more imaginative discussions.

In addition, the FRED programme (Fathers Reading Every Day) says that dads who take an interest in their child’s education are encouraging speedier progress, better behaviour, more enjoyment of school and – eventually – better educational attainment. Reading books to children is a wonderfully easy way to instil a love of language, improve vocabulary and spark young imaginations. 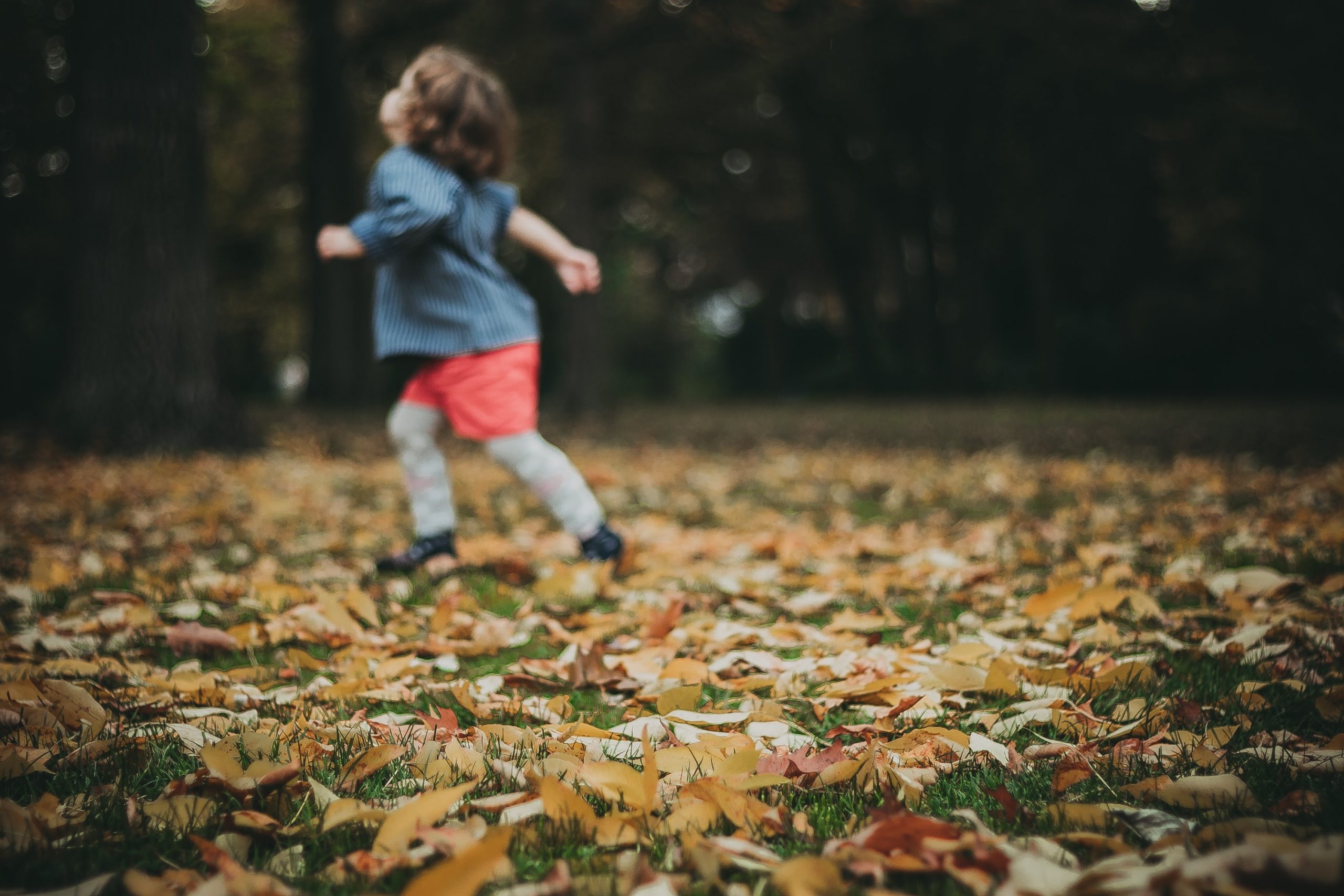 Studies have shown that dads tend to bond with their children through play. But that’s no bad thing, as long as dads put their phones down and get truly involved in the game. When they do, play has hugely positive benefits for babies. Studies show that children whose dads are engaged and involved at playtime have fewer behavioural issues later on. Dads also tend to encourage ‘rough and tumble’ play, which teaches children about boundaries and how far they can go.

According to Dr Paul Ramchandani, Cambridge University’s ‘professor of play’, keys to productive play for dads and small children include:

We’ve discussed the influence of dads at bath time before on DaddiLife, and it’s worth repeating. The authors of a 2001 study urged dads to take a more active role in the bathtime routine. The 14-year study found that problems in teenage years could be traced back to a lack of quality time with dads in the early months of life.

Specifically, it concluded that babies who weren’t bathed by their fathers were three times more likely to exhibit behavioural problems when they hit their teenage years. Infants who were never bathed by dad were more likely than peers to be lonely and anxious as teenagers. Bathtime is a signifier of involved, hands-on fathering, which has been shown time and again to be good for children.

Right from the start, a dad’s interaction with his children helps prepare them for higher educational attainment and a better school experience.

Children have better vocabulary and more complex language skills when they have regular conversations with dads. Dads also influence their children’s social development and relationships with peers, something which directly influences their experience at school. Supportive fathers have children who are socially competent and have more positive friendships. 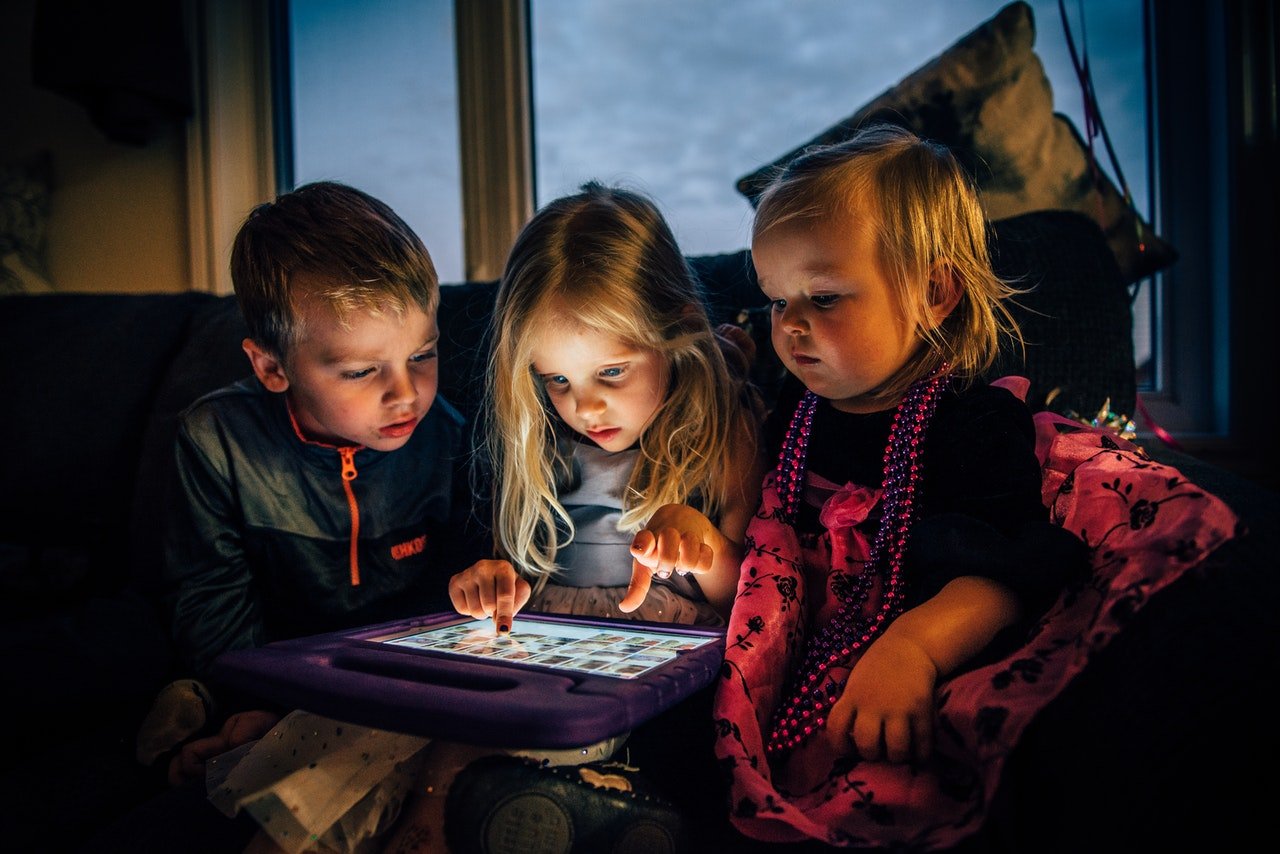 Good dads also impact their children’s education by providing materials and resources. In short, when dads take an interest in their child’s attainment at school, they invest in their success through books, computers and educational days out.

Dads have a profound effect on their teenage children, but that effect starts long before the teenage years even begin.

For example, pioneering research conducted by Bruce J. Ellis of the University of Arizona found that when girls had a good relationship with their dads from an early age they had a reduced risk of early puberty, early sex and teen pregnancy. Research also shows that teenage girls whose dads are warm and supportive report higher levels of self-esteem than peers.

In addition, research by the University of Connecticut has found that teenagers of both sexes who feel accepted by both mums and dads are more confident and stable, while the children of hostile parents are more negative and unstable.

A father’s influence on the lives of teenage children can be negative as well as positive. When dads are absent, children have more problems, and these issues “extend into adolescence and adulthood and include an increased risk of substance use, depression, suicide, poor school performance, and contact with the criminal justice system.”

One area of research we believe will grow in the future is the effects of social media and digital life more widely. A balance needs to be struck between encouraging responsible internet use, and keeping children safe from the web’s darker side. The key is to promote digital resilience, which accepts that while we can’t eradicate risk completely, we can equip our children with the skills to cope better.

What science has discovered about the father effect can lead to only one conclusion. Good, loving and engaged fathers are fundamentally important for the health, wellbeing and development of their children. That influence begins as soon as a baby is born, and extends into teenage years and adulthood. There is still much more work to be done on the father effect, but already the importance of active dads is impossible to overstate. Our  table below captures a summary of that impact. 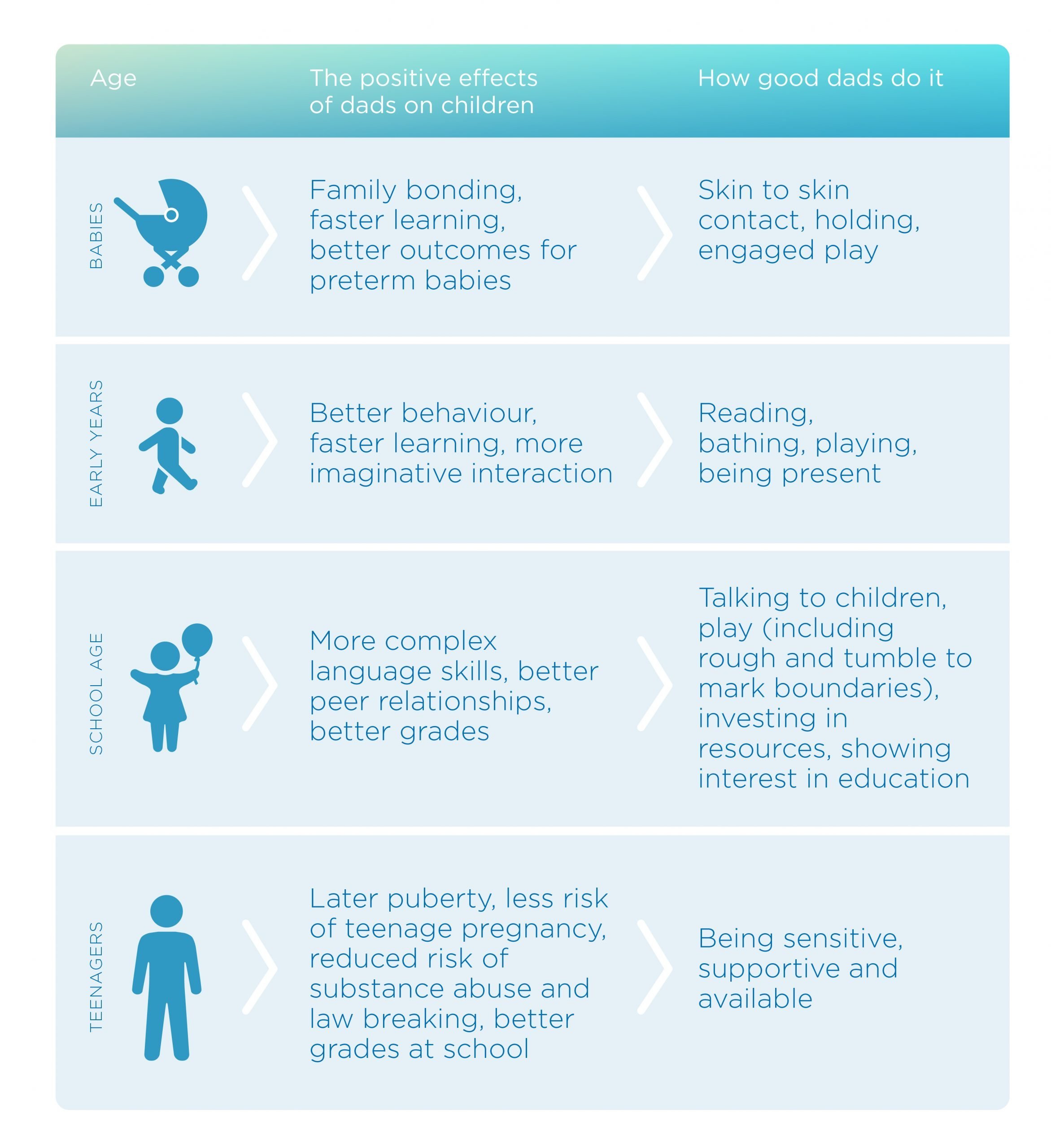 The Father Effect – The Science of ‘Dad’ was last modified: August 25th, 2021 by DaddiLife 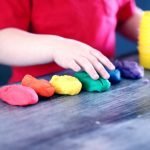 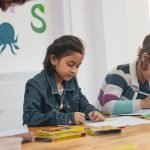 How to prepare your children for the return of school