Bathtime is a magical moment for dads and kids, with a host of benefits for both.

A mother in Australia has caused uproar by claiming that dads shouldn’t bath daughters, calling it inappropriate.

“I just believe that girls should be getting washed by their mothers and boys get the same from their fathers,” the mum wrote online.

“It’s just got to do with the fact that mum and daughters have the same parts, same goes for men and their sons.”

This is clearly mad. Let’s set aside for a moment the issue of single parent households, and just focus on the implication that a loving dad washing his infant daughter could be in any way inappropriate. I have a son and a daughter, and have happily bathed them both. I don’t think that makes me a monster.

That smile ? (not sure what happened to the last one so reposting) #baby #bathtime #love

In fact, quite the opposite. Bathing your children is one of those parenting hacks that just works, in all sorts of ways. Bathtime is fun, relaxing, playful and focused. It’s just you and your child, enjoying a moment together. It’s a wonderful bonding experience.

So much so, in fact, that the authors of one study, conducted back in 2001, were keen to urge dads to take a more active role in the bathtime routine. The 14-year study found that problems in teenage years could be traced back to a lack of quality time with dads in the early months of life.

Specifically, it concluded that babies who weren’t bathed by their fathers were three times more likely to exhibit behavioural problems when they hit their teenage years. Infants who were never bathed by dad were more likely than peers to be lonely and anxious as teenagers.

Researchers believe the combination of warm water and touch leads to the release of the hormone oxytocin in babies, which promotes bonding.

The study is an old one and the effects of bathtime on the father baby bond has not been researched further, but for anyone who has done it the conclusion seems self-evidently true. Bathtime is a signifier of involved, hands-on fathering, which has been shown time and again to be good for children. It’s also just great in itself.

Babies and toddlers love splashing in the bath, and for dads it is a few minutes of uninterrupted and focused time with their child. And when we say uninterrupted we really mean it. Only the most foolish father would get expensive electronics out in the vicinity of a bathing baby.

Dad of two David can tell you why: “Bathing my eldest daughter was a lesson in resigning yourself to the inevitable. Everything would get wet, especially me. My advice is to wear old clothes, put loads of towels down, and join in the fun. Don’t bring your phone to the party. I put mine down next to the bath once and turned round to the sight of my daughter pouring water on it from a jug.”

Don’t bring your phone to the party. I put mine down next to the bath once and turned round to the sight of my daughter pouring water on it from a jug

Bath time is great. Dads should enjoy every minute of it, with sons and daughters, and ignore the comments of a reactionary and rather weird minority.

Dads bathing kids is good for everyone was last modified: August 25th, 2021 by Hugh Wilson 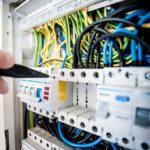 Fire Safety At Home – The Ultimate Guide For Parents 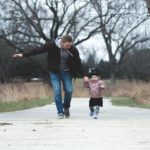