What does it feel like to send your child to reception, primary or secondary school for the first time? We talked to three dads in different stages of the back to school experience.

Mike – dad to 5-year-old Ellie, moving from reception to year 1.

Steve is recounting meeting up with a couple of other dads last week, each with a child starting secondary school for the first time. The first question anyone asked: “How was it for you?”

Sending your child to school for the first time is an anxious moment for any dad, but as Steve can testify, the first day wobbles aren’t restricted to nursery or reception. Whenever your child changes schools, or even moves from one academic category to another, the worries return.

“I was more worried than Danny before he went,” Steve says.

“I remember that moving from junior to secondary school was a big moment for me, and I found ‘big school’ really intimidating at first. After being at a small, cosy junior school, I found the big kids at secondary school scary, and I was quite taken aback by the step up in academic expectation, and all the homework!”

Steve was worried that Danny would have the same experience, and the paternal protection instinct kicked in. “I watched him walk off on that first day and thought ‘anyone upsets him, they’ll have to me to answer to’ – and I meant students, teachers, dinner ladies, anyone!”

Mike had a similar experience, albeit far earlier in his daughter’s school career. Ellie moved from reception to year 1 of primary school at the beginning of this week.

“I was a little anxious, but obviously not as much as when she first went to pre-school,” says Mike. “Her new class is in a different part of the building, but she is still with the same group of friends. Our biggest worry was how she’d take to the new teacher. Ellie can be quite judgemental of adults! She can take a dislike to someone really quickly!”

Perhaps the most worried dads were those sending their children to reception for the first time. Christophe, dad to Daisy, admits to being “terrified”.

“The build up over the summer has been awful,” he adds. “Not for Daisy. She met the teachers and spent time in the building and has taken it all in her stride. But me and her mum have been in bits about it!

“Maybe that’s natural. My partner and I both work part-time and share childcare equally, so I’ve been with Daisy a lot since she was born. It was quite a shock when it dawned on me that she was at the age – 4! – where she was ready to leave us for long parts of the day. She seems too young for school but that’s just a dad’s perspective.”

Certainly, a lot of dads have been feeling the same way. A 2014 study by the Professional Association for Childcare and Early Years (PACEY) found that over two-thirds of parents feel anxious about their child starting school with half believing that they are, in fact, more anxious than their child.

As Steve discovered, having a child start secondary school is not far behind in terms of worry, with children often expected to travel further from home on their own than ever before, deal with multiple teachers rather than just one, find their way around a much bigger site and cope with a far more crowded environment. Surveys show that, for children starting secondary school, being bullied, not making friends and homework are three of the biggest concerns. Parents take on those fears too.

“Before last week I was lying awake at night feeling really worried about the prospect of Danny getting bullied, or getting lost, or any one of a host of other fears,” says Steve. “But maybe there’s something more fundamental going on than that. Maybe I’m just feeling sad that my little boy is growing up, and that he needs me less than he once did.”

Mike draws a similar conclusion. “I don’t think Ellie’s step up is such a big one, and I know she can cope. But it’s one of those moments when you sit back and think, ‘don’t they grow up fast’. There’s something a bit poignant about that thought for any doting dad.”

So all our dads had concerns, and maybe they all wanted time to slow down a bit. But how did their very different first days actually go?

“Ellie was absolutely fine,” says Mike, “She came home buzzing. She was definitely ready for the change.”

A qualified back to school success

Steve’s first day fears were alleviated a bit by the fact that only years 7 and 11 started back at his son’s school on the same day.

“That definitely helped – the school wasn’t so crowded and Danny could get his bearings without facing the full on secondary school experience,” says Steve. “The other years started back the next day and, at the end of week one, I’d say it was a qualified success. On some days he’s been fine, on others he’s come back a bit subdued, but only because I think he’s finding the whole thing quite exhausting.”

The good thing is that some of Steve’s fears have been alleviated already. “The school seems to be very on it about bullying – there’s been lots of communication about it. He’s also met a couple of lads from another junior school who he knows from the football club he trains with, so he’s already widened his friendship group.”

Christophe describes the experience so far as “a roller coaster ride.”

“The first couple of days were fine. Daisy was a little quiet on the walk to school, and obviously a little anxious, but she came out happy, saying she’d made a friend and had a nice lunch and done some painting, so all seemed well.

“The third morning, she burst into tears and had to be coaxed from my partner’s arms. It was awful, but apparently it’s quite normal. The first day or two are all about the novelty – then it dawns that this is it now, this is what happens every week.”

But Daisy was happy and smiley at hometime, and now all three children have negotiated the first week of their new lives. All three dads declare themselves fairly pleased with the results so far.

“I’m certainly less anxious than I was a week ago,” says Steve. “But I’m not fine about it or anything like that. After all, tomorrow it starts all over again…!”

How was back to school for you? was last modified: September 9th, 2018 by Hugh Wilson 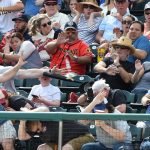